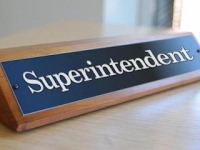 Completing its search for a new Superintendent, the Blachly School District #90 Board of Directors is pleased to announce Adam M. Watkins as the District’s next Superintendent, effective July 1, 2020.

The selection is the result of a national search conducted with the assistance of the Oregon School Boards Association that produced 22 qualified applicants from diverse geographic and professional backgrounds.  Mr. Watkins’ contract was approved at the May 20th board meeting.

Mr. Watkins comes to us from the Creswell School District, where he served as the High School Principal / CTE District Coordinator for the past 3 years.  Prior to Creswell, Mr. Watkins served as an administrator and teacher in Salem-Keizer Public Schools for 16 years.   Recent initiatives he’s helped lead include improving the CHS graduation rate, and dramatically increasing the number of available dual-credit and CTE courses in the high school.  During his tenure at Creswell, significant gains were seen in English Language Arts performance indicators, on-track for graduation percentages, and overall school culture and climate.

Before joining Creswell School District, Mr. Watkins spent eleven years as a high school assistant principal, curriculum assistant, athletic director, and member of the Oregon Athletic Directors Executive Board. He also spent five years as a middle school teacher. Adam is an instructional leader with a clear vision for preparing students for success and is passionate about serving students, staff, and our Triangle Lake community.

Additionally, Mr. Watkins has coached a variety of sports, including men’s basketball at Western Oregon University (Assistant Coach) and has had a multitude of head and assistant coaching experiences at the high school level in basketball, football, and golf.  Of special note: Mr. Watkins was inducted into the Central High School Hall of Fame as both a player (member of multi-year state championship team in basketball) and as a coach (girls basketball state championship team).  He also has enjoyed coaching his own children for many years in local youth programs.

Adam is a northwest native, originally from Monmouth, Oregon. He and his wife, Stephanie, currently reside in Monmouth, where she is a middle school counselor at Talmadge Middle School.  They have six children – two girls & a daughter in-law (Jordan, Charlotte and Dani) and four boys (Jacob, Joshua, John, and Jackson).

Mr. Watkins is looking forward to meeting all of the students, staff and families of Triangle Lake Charter School and is truly excited to be the next Superintendent of the Blachly School District.  Although he does not formally start until July 1st, welcome wishes can be sent to his new, district-assigned email address at awatkins@blachly.k12.or.us.

Please, join the Blachly District School Board in welcoming Mr. Watkins and his family to Triangle Lake Charter School and the Blachly School District.  We are incredibly excited to have Mr. Watkins as our new superintendent and look forward to many successful years working together!

To read our non-discrimination policy and find out how to file a complaint, see our District Office info »